I was watching a review by Dave Callan (ah, what a great surname!) of some dance games on Good Game. A review with back up dancers!

Anyway, he refered to one as having a "Boyfriend" mode, especially if the boyfriend has a mullet and likes wrestling. As it was the theme with the figures on the screen.

This reminds me of the outrage of "Girlfriend" mode idea in Borderlands 2.

So how does one end up outrageous, whilst the former probably doesn't bare mentioning.

Why the distinction?
Posted by Callan S. at 5:54 PM No comments:

I was reading people talking about 'what makes a dungeon interesting' today.

And it struck me as incredibly pompous. Like a rich man picking over incredibly expensive food - bored with the lot, had it all before, looking for something interesting amongst it all.

I'm tempted to preach the virtues of characters who can die, instead of the usual 'Oh, I want to develop my special character!'.

Things taste better - they taste more interesting, when you may not taste them for much longer.

But then again that's the thing - alot of people think their character is the only interesting thing in the world and they focus on that, before a world even exists.

How can anything else in the game world compare?

The other is where you're like a couch potato, channel surfing, wanting entertainment.

In the latter case, it's the position that undermines the interest, basically. Like playing poker for nothing, rather than for some money.

Safety undermines.
Posted by Callan S. at 11:52 PM No comments:

Is alot of roleplay based on hypocritical practices?

I was thinking, the way players might expect some amount of creative control over a game - is that hypocritical?

Let's assume the game was good for them somehow - and because it was good, THEN they want creative control.

They only want in once the bread has been baked. As if they deserve creative control in a roleplay game they did nothing in building up from scratch.

Certainly if the game is somehow (in their subjective judgement) not good, then they (99% of the time) don't want to try and put in effort to build it up. They just abandon it.

Yet if it's good, then they want creative control. In particular this begs the situation where their creative input simply wrecks what's there - but again, why not, as they didn't put in any effort.

It's quite a dilemma. Roleplaying generally involves players having some creative control. But if it keeps getting handed out to people as if they deserve something they don't respect?

Possibly this is why leveling systems (like in D&D) took off - at the start the GM necessarily put in a great deal of effort. Here's some giant rats to kill. Done. In other words, no ones put any creative effort in as yet. So if all participants help nurture the game, it continues - the higher levels requiring greater amounts of creativitity as you start to deal with organisation of enemies, or even pantheons.

Perhaps RPG's could do with some system that ensures everyone either contributes to nurture the game from scratch?
Posted by Callan S. at 6:31 PM No comments:

'Of Orcs and Men' sounds interesting! 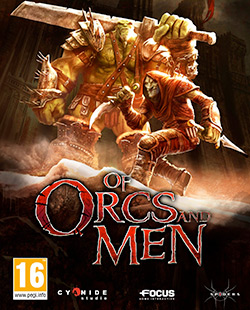 Can't tell if it's single player only or has a capacity for co-op? Kinda like an orcish army of two? 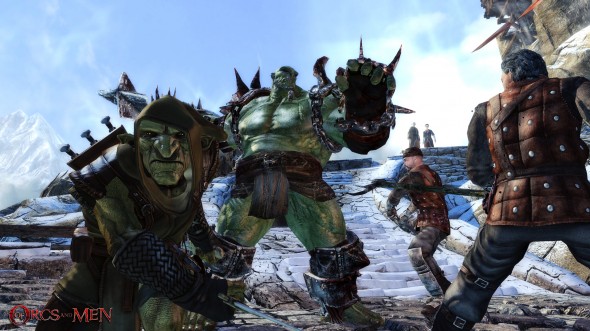 Just that in Australian stores it's around the $70 price mark for the playstation (didn't shop around for that price, there might be lower ones). Support a different idea/perspective by buying it early, or wait for a bit of a discount?

The goblins background sounds interesting, how he says yeah, the other goblins are stupid - but he's a survivor. Old enough to be the orcs grandfather.
Posted by Callan S. at 6:17 PM No comments:

Labels: of orcs and men

Army of Two: 40th day - shoot the cutscene in the back!

Man, a boss you can't figure out (we've turned him around and emptied all bullets available to a small nation into his back) right after an unskipable cut scene? It's like one of those cut scenes which is actually cool and bad ass and...that leeches right out.

That's quite a way in - otherwise it's ludicrous two player anarchy fun prior. Those mad strategies you formalise on the go between the two players.

Apparently you shoot him in the back, I read and watch a video where - the AI team mate shoots him in the back for ages, then the player pops out and shotguns something off his back. I dunno - I'd have thought all those bullets we shot would have done that by chance, atleast!
Posted by Callan S. at 6:00 PM No comments:

I watched an developer interview recently that said in the game Dishonoured you can get through the whole game without killing anyone.

There's a teaser chapter up for the latest in the Prince of Nothing series, for the new book 'The Unholy Consult'. Over at the second apocalypse forum. Gives some insights into trapping souls...and dreadful places!

http://secondapocalypse.forumer.com/excerpt-the-unholy-consult-chapter-one-t1246331.html
Posted by Callan S. at 4:43 PM No comments:

Let's face it, you're gunna reload. You don't die in the game. There's all these causal paths where something blew you up - but...not really, that got pruned at the press of a quick load key.

So what if the losing condition was that the monsters manage to escape? You can't die - get your health knocked down to a certain level and the monsters freak out and leave through various unfollowable escape hatches.

"But that's frustrating - I hate letting any monsters get away!"

Exactly. That's why this isn't going to sell on you, but to have some kind of literary merit in a game, it has to screw with what you prefer to some degree.
Posted by Callan S. at 10:03 PM No comments:

And I really can't tell if the thugs on the street are getting tougher, or I'm getting crapper somehow.

I'm guessing they are getting tougher. In Arkham Asylum you had a semi linear tunnel, so you could tell that the further you go, the tougher it gets. Here - it feels like - I dunno, did that guy club me in the back of the head because I screwed up, or actually he's been set to a higher difficulty.

It's an odd flaw - ambiguity of difficulty. It'd be better to show the difficulty of the goons somehow.
Posted by Callan S. at 2:55 AM No comments: