To be (subscribing) or not to be, that is the question

Actually that titles a little hyperbolic. It's not a huge question.

But I've been thinking about subscribing to warhammer online for awhile, but the first thing is they had a massive accounts stuff up recently, where people were charged up to thirty times their normal sub in one month. They are correcting it and appoligising, though they aren't offering any free time for the inconvenience, either.

Man still shouting at Evony advert
That's not even the biggest thing - the thing is people who were no longer subscribers also got affected! I mean, while playing I can imagine dealing with a stuff up, but I can just imagine finishing with the sub, then a year latter a bunch of financial pressures start to kick in and pow, they stuff up again just when it's vital my finances remain as is.

On the other hand I'm thinking that once I finish subscribing I could change the billing info to bogus numbers.

The other thing are some issues that Tesh has raised about subscriptions. I mean, what am I buying? It's rather like buying a newspaper, but if you don't read it all today the paper is gone tomorrow unless you buy it again.

I mean, given that, is subscription really an inappropriate word? When you subscribe to a magazine, you keep the copies. Granted with a gym, once you stop paying you can't go in. But it's called a gym membership, not a subscription.

The other thing with a gym is that it's not about content. You go there, you see if you can buff yourself, tone yourself - your not there to look at something pretty someone made (though perhaps you check out other members...hehe).

So while warhammer has PVP that involves self improvement, it also has a lot of 'your almost about to see this new thing' content tease, if you get what I mean?

What am I buying? If I buy even for the 'gym membership' factor, I'll be setting myself up for a big content tease. Content I can only see if I shell out money - and I mean, we have girlfriends for that! ;)
Posted by Callan S. at 11:41 PM No comments:

Having both collected gear and even gear matches

That way you get the sort of very equal resources play you find in quake live, but also you can still have gear collecting.
Posted by Callan S. at 5:10 AM No comments:

Four levels and a funeral

I've been playing alot of the warhammer endless trial recently, just in case it wasn't obvious :)

And because you will end up 'dying' quite a bit in it, it makes me wonder what on earth is the point of depicting death in mmorpgs?

Granted in lord of the rings online your not supposed to die but simply have your morale beaten and you retreat, but given the format is exactly the same as death in other mmorpgs, it doesn't feel any different. Like a short cut scene of the character clutching his side and shuffling away would show he's just really hurt and retreating. 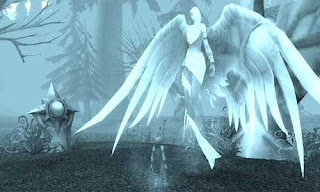 It's only a flesh wound!

I mean, what is so much the thrill of 'ohh, yeah, killed ya...oh there you are, fifteen seconds latter?' that you need to preserve it?

It's kind of like one of those glaring graphic glitches that makes your characters head dissapear or all the trees turn into solid colour blocks. It kind of spoils things?

Here with death, your character like totally died...but he's alive...oh he died...oh he's alive. It feels more like a big presentation bug.

If he retreats though, clutching his side, there's continuity.

If you want some gore, you could even have the character lose fingers and toes or even a hand (quickly replaced with a hook or magical construct) and the 'killing' player gets notified, so he gets his gory jollies (well, what else would you call it?). From what I've heard this can happen in, of all places, puzzle pirates - you can lose an arm or leg and get a peg leg or hook. BUT also like puzzle pirates you would have items to regrow fingers or hands/feet/forarms. Usually with the magic or technology in most settings, this is fairly believable (far more believable than perfect ressurection any time you want it).

Lord of the rings online (LOTRO) almost broke out of it - and maybe it's unfair to say given that it still seems to be a death system in LOTRO because it looks like death in every other mmorpg. But it still leaves you being ravaged by monsters and then...popping up elsewhere. You wouldn't do such a harsh transition in a movie - you would explain with a short cut away what happened in between.

Death - you can't have it, mmorpgs (because of your own design choices)! So quit trying to pretend its happening and just smooth out the wounded retreat presentation.

It's like the want to be macho manly 'you can totally die in our game', except it's faux-macho, because even the most minor amount of critical thought disproves that idea. But maybe alot of people (men?) can't give up that bullshit?
Posted by Callan S. at 3:54 PM 10 comments:

One important element in warhammer is how your not stuck in a linear path in terms of what your doing. For example, I don't know if they changed it since, but in WOW you either PVP'ed, or you quested out in the world. You had to stop questing, head all the way into the heart of a city and sit around waiting on a battle que. 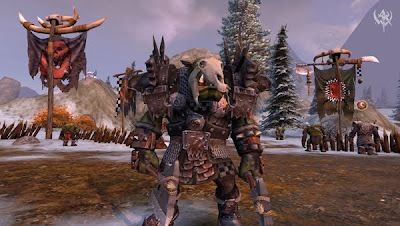 In warhammer, you can have your thumb in a few pies at once. You can be questing around, but have set yourself into a PVP battle ground que from any point (even from the very moment you start playing a new character, actually). It'll pop you into the scenario once its ready, then put you right back afterward. That way if you want to do PVP, questing is something you can work on in between scenarios rather than being a big one or the other, not both situation.

To me, the low level PVE questing is much the same as other mmorpgs - somewhat interesting, but if it's the only thing your doing, the shine wears off quickly. However, if your breaking it up with an occasional intense PVP scenario, the questing doesn't drag on an keeps it's shine. Or if your enjoying the questing just for its own sake, don't turn on the scenario que. It's up to you and you shape how you play, rather than being stuck in the way some developer decided to go.

That and you can dip into public quests as well while on the way to your normal quests, which you were doing while you were waiting on the scenario que - you genuinely choose how you have fun and in a way that doesn't hurt your progression (sure in other mmorpgs you might have freedom to explore, but generally it hurts your numbers progression - and if that doesn't matter to you, then 95% of mmorpgs don't matter to you).

I've been playing for about a week or less now and have gotten a few classes to level 10. I'll talk about how I feel about play now - latter I might get into my first experiences. 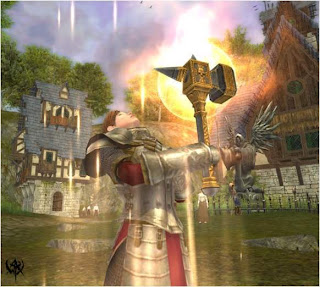 One thing I appreciate is that characters are solid in PVP combat. You can't run through another person. In world of warcraft this just seemed A: The most incredibly lamo tactic, along with jumping (which you don't see in WAR combat either) in world of warcraft and B: If you have a slow connection, it was even more powerful.

I mean, why bother with this sense of a world with living, breathing characters (who have been drawn and animated with so much care) when you then have combat with surrealist tactics like walking through someone? Why not make a seduku world or some such, where some arbitrary mathimatical rules are the key issue? Why try and make all these stupid powers named in relation to real world actions, like charging, and they look like a charge, but then the heart of combat involves walking like a ghost through, and then back through, other people?

Anyway, you can't do that in warhammer online. And as said, people don't jump around in combat either. It lends a solidness to gameplay, and even with my slow connection I can actually connect with people in melee combat on a regular basis.

Looking at the warrior priest class (hope I've got the name right there), because I'm playing it right now, I find their healing actually is kind of a challenge to do, instead of just dropping heals everywhere then doing nothing when your mana runs out. Instead you build up healing points by bashing things. That or you can sit there for five seconds using a power to regenerate a bunch of healing points. So along with the targeting, where you can target an opponent and a friendly at the same time, your looking to slap opponents with melee attacks (some of your powers grant healing to yourself and comrades) to help charge up healing so you can then turbo heal a bunch of folks, then run in and bash, etc. You don't stand there sort of wack a mole clicking on team mate bars that are dropping, healing, then doing nothing if your mana runs out.

That's another thing that deserves quick mention - the action points your character uses to attack, they regenerate very fast. And about twenty seconds after you've left combat your health comes back at a fast rate too (about a quarter every five seconds). This game isn't really about slinking around, licking your wounds and not doing anything on a repeat basis!

This will be a series of posts looking at warhammer online, since I finished downloading the free trial on my slow as internet connection.

It's a bit over a thousand megabytes - probably to you guys with fast connections, that doesn't mean much. To me it's one of the largest downloads I've done - but if your in the same boat, you download the launcher, install it and it pretty much putters along. Though if you stop it and start it again it wont show the previous progress on the progress bar - just saying cause I was looking at it wondering if it had dumped all the progress it had made. But it has made progress! Also if you have a slow connection it will ask you if you want to turn off streaming data - say NO, as if you say yes it'll try and download the whole damn game and you'll be waiting for eternity!

I'll get onto gameplay shortly, as this is a kinda warm up post :)

Oh, and here's a couple of amazon links in case it's relevant