I can't really keep up with the lengths of the posts over at rants within the undead god. Not that that means much, but for context its worth noting.

But there's this recurring notion of 'scientism'. Quoting the article:

“Scientism” has a nonpejorative core meaning, but also pejorative connotations. According to the core definition, scientism is the belief that the sciences are the only disciplines that supply us with knowledge. Scott says that “humans are theoretically incompetent, and that science is the one institutional prosthetic that clearly affords them some competence.” This seems scientistic in the core sense, although he also says that true claims can “drift about” in nonscientific philosophy. So if “scientism” is tweaked to mean that science is the only reliable source of knowledge, Scott’s view is scientistic, for whatever that nonpejorative characterization is worth.

The reason the word is usually read as pejorative, though, is that philosophers have reached some consensus that scientism refutes itself. After all, scientism is a philosophical rather than a scientific proposition. Just ask yourself, then, whether the claim that science is the only reliable source of knowledge is itself reliable. If not, we needn’t trust that all knowledge comes from the sciences, and if so, we have the paradox of knowledge that comes reliably from a nonscientific discipline (philosophy). Either way, scientism is unstable.

I'd swear this is a functional limitation of the human mind in general. The fact that as soon as we take any skin out of the argument, we get to here - philosophy central, where suddenly things are utterly self cancelling.

But the fact is, take a basic science experiment, like some sort of test of whether there is a capillary motion that occurs when fabric is dipped in fluid. Now lets put in the skin - if it does occur but you don't agree it will, you get smacked over the back of your hand with a ruler (or lose $50, if you prefer).

No matter how many nukes or literal scientific raising from the dead (people who are legally dead are revived), it this very theoretical incompetence that lets us, sans anything to lose, go right back to complete indifference or refusal.

Or, from the alternate side of the fence position, I guess its all actually very self conflicting as science isn't proven, etc - all said from the non risk of an arm chair.

It may even indicate a dread dichotomy in the brain - perhaps even supporting the notion of there simply being a rationalisation module in the brain, itself fairly distinct from the rest of the brain. Because basically where there is nothing to lose, the arguments against 'scientism' just flow. But when there IS something to lose, suddenly that dries up! It suggests that the part that is talking is not in charge and that the rest of the brain, when it detects it could lose something, literally cuts the crap! The practical brain and the rationalising brain. The former lets the latter off the leash when the latter might vaguely benefit. But when you stand to lose something by letting the latter off the leash - zip!

I speak from the notion that this might aid in navigating the world. A practical concern. Skin involved.

Or we can recede to the skinless world. 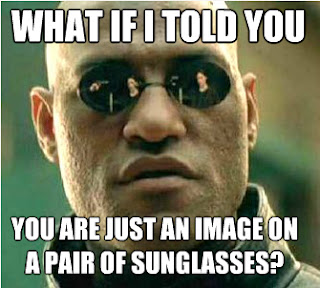 In dust there are top of the line armours and weapons called prototypes.

Supposedly there's a disincentive to use them in public matches (as opposed to planetary conquest), because they cost alot to replace (when you die, you lose all gear on you. You can buy replacements, but they cost money/isk).

Today I ran into someone who had said public matches don't matter. To which I said, 'yet you bring the proto'. Turns out I guess right - they say they have an f' ton of money and still make money in proto. Presumably it's more powerful therefore they lose it less in battle.

So, there's another entry in this blog apparently becoming a 'look at the ugly welts and lumps of Dust 514'. It's kind of a wierd game - perhaps not even qualifying as 'game' in some respects.
Posted by Callan S. at 4:23 PM No comments:

In games I'm used to (which granted are often the single player persuasion), when you add skill points, you get better at shooting.

In Dust 514, with the assault rifle and using a dual shock controller, it feels more like you can actually hit guys once you get your operation up to about 4 and sharp shooting to about 3. You see little shield and armour bars actually slide down.

I'm not sure I've gotten that much better at aiming with the dual shock - I'd say this comes from statistics only, not from player skill.

Granted it may be like this for many weapons. But if you go for the overall workhorse that is the assault rifle, it seems to unlock the potential to hit about here.

I guess that's why they start you off with about 500,000 skill points - so you sink it all instantly into one type of weapon.

But if you don't (and nothing stops you from doing this), you might find you pretty much hit nothing at any range.

Though if you find there's a particularly good newbie weapon (the mass driver, maybe? I haven't tried it yet), feel free to comment!
Posted by Callan S. at 9:47 PM No comments: