Here's the working page for a kickstarter project I'm initiating, called 'Castle under the Forest'. I'll post the link to it here if I can get it to go live (first time I've started a KS)

And here is the link! : https://www.kickstarter.com/projects/1286910914/castle-beneath-the-forest

This kickstarter is about writing a module compatible with roleplay games of dread tunnels and fire breathing dragons - particularly the fifth edition of such things! And of course adaptable to other editions as well! A module that can be used for group play or can also be played in a simple choose your own adventure style!! So you can either run it for a group as DM, or play it by yourself - or do both!

Enticed by the promised of an old debt to be paid to the player characters, it's a delve into a strange underground castle and the concerns and conflicts of its denizens. Consisting of three to five main encounters (the amount depending on writing time (with more from stretch goals!)) and five additional area outlines to explore in addition to the main encounters, it'll be a primarily text based adventure distributed in PDF format via e-mail. Each encounter being from 600 to 1200 words each. I'm an improvisational DM with over two decades of experience and would like you to please give me the opportunity to get some of it down in module form!

So very much link!

Edit: Hey, it got funded! And I've bashed together the survey (I'm just pausing since KS says you only get to send it once so I don't want to stuff up!). Also it's so hot down here so most of the time I'm shaping my body back into its normal form after having melted! But I've got till April to send, so that's over a month. And the basic set of 'ties' that powers the adventure are written up!
Posted by Callan S. at 7:44 PM No comments: 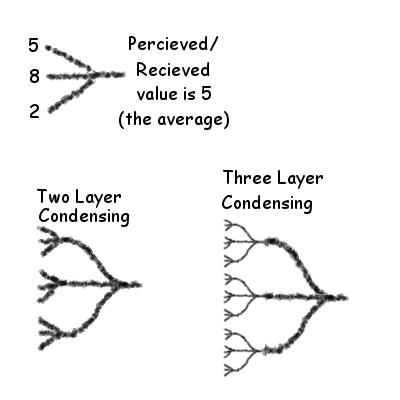 So what's the idea here? Basically the idea of condensing information as a way of processing it. Before we hit any performative contradiction turf, the first image could be 5 volts, then next 8 volts and the last 2 volts. Obviously were describing a thing here - the thing (electricity) came first, then it got named. The name/meaning didn't come first.

Further the collapsing method can be layered as you can see with the bottom two images. So it can happen over and over again, where broad amounts of information get condensed. Each layer could use different condensing methods as well, making the overall processing quite complex.

Again, 'information' exists in the context here as an object - it could be 5 volts, 8 volts and 2 volts. Just as much as the text on the screen you are looking at is really just a series of pixels in different illumination states - you can call it information, or you can call it pixels in different illumination states - both are essentially correct. Or a kind of correct, anyway. 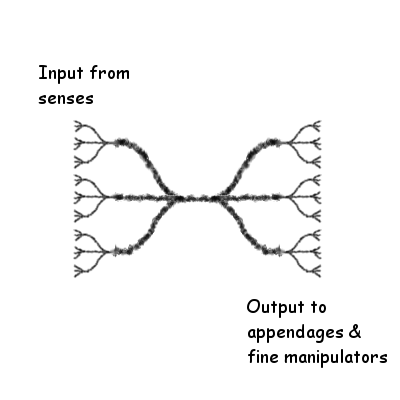 Here there are just three layers going in from the senses, to keep the illustration simple. But obviously there could be hundreds of layers. But in the end they pinch to just one line - if we were working with volts, it'd be a question of whether it had sufficient volts on that line to then fire the electric signal to the right or not. We could call it a yes/no point. Or you could call it a gate that requires a certain voltage to then trigger voltage to the right. Both are essentially correct. Sort of.

The layers on the right basically decompress a 'yes' signal into a number of actions that will be taken by actual physical appendages. While something might register as a positive/yes and while yes/no is very simple, the actions taken might be fairly complex. So the 'yes' needs to be unfolded - instead of condensing the data, we are now unfolding it or dispersing it, since we'll assume the various manipulators need a lot of information to do their job. The act of walking as a biped involves hundreds of muscles, even if the the answer to the question of 'walk forward?' was just 'yes'.

So what happens when the system takes itself as an input?

There's two ways this could occur :
The philosophical question bit

The problem is at this point, which has made me loose one draft already, is that in looking at the technical of this - especially if it all makes sense(!), is to be distracted from any question of 'how could I be seeing all this stuff in front of me, but it could be anything like these condensing lines?' - and heck, that's if you're inclined to ask a question like that to begin with!

So the questions might be "'How do I have all these senses - these experiences - this experience?", perhaps even mentioning qualia?

Please visualise a filing cabinet in your mind, with the following hypothesis as a folder within it - this is to quarantine the idea as being held in this filing cabinet and the cabinet can even be set away in a corner. Now for the folders contents - the reason to quarantine it is because this is largely a virtual hypothesis. The virtual is less convincing, as in being told something exists is less convincing than seeing it with your own eyes. So instead of heading towards the revelatory, it's better to head towards a filing cabinet with a hypothesis in it (though certainly of less ephemeral than a scribbled on napkin. Or a quickly discarded thought).

As said we tend to keep a layer of skepticism around others words, but the filing cabinet mechanism is to stand in for that skepticism instead of wrapping each sentence in it's own individual skeptical wrap. Instead accepting the words like we accept the words when were told Frodo made it to mount Doom. In that case the quarantine method is the idea of 'fiction' - here it's an imagined filing cabinet that can be closed.

So within the conceit, as gravely taken as mount Doom, take it that your experience, your sense of qualia, involve the point between where you can track your own condensing layers and where you lose track of them. Losing track of them well before the final line that leads to the right hand side/the enabling of physical actions. Indeed, this is an attempt to let you track them further than you normally could, if only by virtual means. But it will still be a very low resolution tracking.

Complicating matters, there will not just be one single line across, but many. All 'unaware' if one could use that term, of each other. All very significant - probably many of them running through the corpus callosum. This distribution of pivotal yes/no decision making is one of the most difficult elements of the tracking exercise.

The other part is, as said, the tracking to only a certain point. When the yes/no decision is at layer 100 but tracking ends at layer 80, you have 20 unaccounted layers to account for.

And so on and so forth - an infinite ambiguity. An infinite soul.

So too does the tracking of oneself end without acknowledging an end.

And thus it easily seems everything that was needed to be tracked, was tracked. And the unexplained explainers others claim your report has, aren't, because you tracked everything thus it must all make sense - and soon enough 20 more unaccounted layers will seem to account for that. Bringing new unexplained explainers to the conversation and bringing your interlocutors to tears.

The final stage of it though is the processing method itself - the collapsing of fine grain data into generalisations and averages. This occurs to the very tracking issue itself - the fine details of it are collapsed down to a much simpler format. Thus you can't see or perceive much more than a far removed/collapsed version of what is going on. Like perceiving a high resolution 3D video game after many collapsing - what you end up seeing of it all is the same as a blocky pixel on the Commodore 64.

Your qualia are simply the failures to track and the low resolution collapsings of something not at all mysterious. But when you always fail on the last 20 steps of tracking something, of course it remains mysterious - it's no mystery that that'd end up a mystery. Do qualia simply have to remain mysterious when one way of obtaining mystery is to continually fail the last 20 steps of tracking?

Does that answer what this overwhelming experience thing is? It answers it by explaining your own lack of complete tracking ability. You are left with a swiss cheese of understanding, and needing to survive in the world, you go on to fill the holes with whatever ideas will get you through the survival of the day.

And that's the end of the file contents.

It can't be ad hoc dismissed any more than Frodo's journey to mount Doom can be dismissed, as it used much the same quarantine that 'fiction' is.

To borrow its terms, it works at the virtual level/a fictional level so as to avoid tracking failures - you can't invent a reason why it comes down to something other than a tracking error because A: it's a hypothesis/fiction, thus doesn't require any real life tracking to occur and B: that's how it's depicted in the hypothesis/fiction/story.

Despite not being able to argue its contents, it does raise the question of how many paralels it has with real life.
Posted by Callan S. at 7:12 PM No comments: