By reading my blog you tacitly agree you owe me $100. Sounds stupid? Exactly.

I'm really astounded about people understanding of the legalistic/police structure that hangs above them.

In fact this is exactly the same principle I've described where people complain about gankers ganking them, never thinking the ganker could not without the programmer putting in the ability.

It's like all you have to do to become utterly invisible to people is that you get someone else, who was otherwise incapable of attacking them, then arm that person and send them on the attack. The only thing the target will think about, apparently, is the person attacking them. You, the arms dealer - your invisible! Enjoy your stay at club blindness!

And so it is here

The idea that somehow, magically, other people in the world just mystically have the capacity to obtain your tacit agreement to use your copyrighted property.

Instead there is a legalistic/police structure where for some reason. Somewhere in that mess are people(s) saying that if someone uses your copyrighted property and you don't 'move against them', you've given them tacit approval.

Except everyone blames the person either using the copyright material or the one suing them for it - they are all blind to a third party. A third party who is an ass. As well?
Posted by Callan S. at 8:34 PM No comments:

Would you pay 20cents to play a naked orc game? No? That sounds silly?

Is it an observation to say that what seems to be the cool thing, though not much to do with the game...

Is done here in the second video?

It also raises the question that if you pitched a game where you said "Hey, in this game for two hours you can run around as a naked orc and wail on something to not much effect" the very people in this video would be unlikely to buy it, or even download such a game for free. Yet here they are, doing it, no doubt for roughly two hours or so (including getting there, etc).

People act like they have high standards and pretend they aren't into certain game stuff, so much so they wouldn't buy it. But they are. It's hard when your actually trying to make games, yet people wont admit they wanna do X. Even to themselves.

Oh, the twenty cents I pulled from the idea of playing five hours a day multiplied by say thirty days. Then divide $15 by that.
Posted by Callan S. at 9:28 PM No comments: 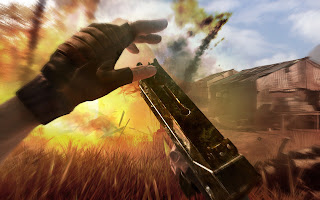 I really think farcry 2 could have done with dual currencies. I'm playing it and I keep thinking that.

You work in rough diamonds (blood diamonds), and once you buy a gun with them, you have an unlimited amount of them.

I really think that if they used paper money as well as diamonds, it'd add more of a sense of currency to the game. Like the diamonds unlock the gun, but if you want a replacement after because yours got lost or rusty, it costs paper money.

The environment is pretty spartan - really there isn't much point to exploration, and yet at the same time nor is it like space invaders and shuttling you instantly to the next war (ie, there's lots of driving, but not much to see).

While if your collecting cash here and there, it makes the world seem more textured as there, like, actually appears to be something there. Even if you have more cash than you really need, there still seems to be more to the word if you can actually grab something from it that's potentially of use.

Perhaps they were shooting for a grim, nihilistic, empty world feel. But that's the problem with shooting for feel like that - it might make actually playing the game (as opposed to looking at it) not very fun.
Posted by Callan S. at 2:47 PM No comments:

In farcry 2, you can wing someone and they just end up wounded - on the ground, using a crappy pistol.

The funny thing is, no matter what, they will keep shooting at you, if you get close enough. They will never give in to you or do any other approach.

What's interesting to me is that in this circumstance, trying to shoot them in the leg so they don't die, as some sort of mercy, really, definately and is scientifically proven to be pointless.

It's really strange to contemplate the hope for a better world that mercy is, being utterly pointless. Like, there is no point. Just kill them. Nothing can change, ever. Mercy is a stupid, pointless move.

It almost feels like a flickering candle in a infinite darkness, flickering out. Except it's just a game. But it's strange to even get a remote sense of what the end of hope is like.


Oh, who knew I'd end up philosophising on this blog?
Posted by Callan S. at 2:27 PM No comments:


It's really surprising how in terms of online multiplayer games, or even single player, the phrase "It's so addicting!" is said with a possitive inflection.

I mean, just chew on that for a second. Is that really a possitive quality?

Perhaps to the person addicted it is. But I imagine people on heroin probably think the world of heroin as well.

There's alot of driving in far cry 2 - and it doesn't mean much to the larger game. Or atleast doesn't mean much to what the game focuses on - shootin'! Your driving around empty bushland and nothings there. Sure you might run into a rock or tree...and, you just back up and go around. It wont matter to what matters!

I was thinking it'd be cool if there was a 'smooth driving' health bonus. If you drive for long enough over a certain speed, you get a small bonus bit of health. This might be thought of as including car crash damage in reverse - in real life, if you crash, it's not just your car that gets hurt, is it?? Here we reverse it for fun - avoid hitting things, get a bit of extra health that'll stave off some hurt in the next fight.

But as it is, you do alot of driving around empty land. It's a bit of a 'dodge rocks and tree's, otherwise you'll get there slower', but it doesn't tie in neatly.

On another subject entirely, the games pitched me a moral choice (or however you'd like to describe it) of either choosing to rescue my buddy in the game (who has helped me out on many an occasion, but is pretty much a cut throat mercenary) or save a priest (who I don't know except as the title 'priest', he's helped me with malaria pills and others with transport papers).

I had to save and quit, to think about it. Just couldn't decide that one on the spot!

It shows how easily a game can engage that level of play. Good stuff!
Posted by Callan S. at 4:06 PM No comments:

Farcry 2: Hey buddy, why so shooty?

I'm playing far cry two and sometimes the badguys (or as they are otherwise known, the only people in the whole world) get wounded. Yet they still pull a gat and will pop pistol rounds at you if you get close.

I think it'd be cool if you could actually offer mercy to these guys sometimes and it'd perhaps pay off in a longer term. You tell them to surrender and maybe give them a healing syringe and perhaps at some point latter on, when your screwed, one of them will show some mercy to you.

Indeed I'd love a first person shooter with a sort of political diplomacy element to it that you can engage, to try and bring some peace. Or atleast some geneva conventions to fighting! It'd be interesting. Then again, in Dues Ex, I spent alot of the time sneaking up behind people and cattle prodding them into being knocked out rather than dead. Similarly in splinter cell.

It's just not terribly interesting in itself to kill.

And it takes alot of skill to not kill a man.
Posted by Callan S. at 10:31 PM No comments:


I like the 'buddy rescues you when your down' thing in farcry 2. I bought it recently on budget. Indeed, it's funny - in the same way there is no black loading screen when you enter a house by it's door, it makes the 'grevously hurt' transition an organic one. In a vast number of other games you get a reload screen, or a black loading screen and...is that how they do it in the movies? Or to be more exact, which is more fun or engaging - perhaps in a comparison between a black screen and some sort of movie cut aways, doing something like the movies is more fun and enjoyable instead of a savagely black suddeness (though that's probably what sudden death is like...ahem).

The first time I 'died' in the game, it was simply from jumping off a tall thing and missing the platform I was aiming for (how the hell do I get that diamond case, anyway?). There's my bud, picking my up off the ground and stalking around angrily, looking for the badguy that pushed me off. Yeah, you go find that pushy bastard that did that to me, yeah, cause that's what happened.

The second time was a more dramatic, as I was on one of those prop boats and another had smashed into me and proceeded to hammer me with its mounted gun at point blank range - just as my gun jammed! Given I was on the water, it was quite an interesting transition, fading to black, only seeing my wobbling hands and my bud trying to get me moving - the fade in and out happened three times and we were quite a distance away (well, 50 game world meters away) in the end. To be honest, I've seen this sequence in the movies so many times and it was really enjoyable to both be in it, and at the end we were still in a two way firefight related to the first encounter, so there was this low, then the potential for a high (determined by gameplay).