Adding stakes to mmorpg combat, because lets face it, your not going to die


What I'm thinking would be good for the average 3d mmorpg, given their atleast mildly gamist leanings? I think the computer generates a line on your health bar after you finish a fight. This line is X distance to the left of your current health - so if you recover health between fights, it'll slide over to the right. But if you take damage, it stays where it is.

Okay, if you can beat a monster before your health drops below this line, you get some bonus $$.

That's it! Except that for averge gear, it'd be set so you'd lose most of the time (the line is randomly generated, so it'd be generated a bit to close to full health alot of the time).

The thing about mmorpgs is that if were honest with ourselves, play cannot involve you five times out of six running back from the local respawn point. So really, unless you pick up two monsters by accident AND you were already damaged, your not going to die. Are we pretending to ourselves there's some risk to ourselves?

Hopefully also this doesn't rub some people the wrong way, as it's a reward for doing well, no punishment for not killing the monster in time. I've heard Tesh go on about how you don't need a punishment for there to be a game and I suspect what he means is he wants something for suceeding, not losing something for failing. Of course if you fail to suceed, you miss out on the bonus - that could still be construed by some as a punishment. You are missing out, so there is a sting in that. Really I think it shows that you do need a 'punishment' if only a very mild one and people who say they don't want any punishment actually do, just that kind. To me that makes sense. Whether that matters at all.

Anyway, I imagine it as you, with average gear, missing this bonus more often as not simply to give edge and sting to gameplay. So it ceases to be a walk in the themepark just a little bit.

Anyway ON TOP of this I think you have a mechanism which is kind of like the undying trait in lord of the rings online - ie, if you get defeated over a certain time span, you miss out on a bonus. In this case just have a recurring test - have to gain X amount of experience without being defeated. If so, you gain $$$! If your defeated, you can only try again after a day has passed. OH and what would be cool is if your character occasionally limps, moves slowly for a second or two - say in this hurt state they'd limp five seconds out of every minute of movement. I think it'd be cool!
Posted by Callan S. at 9:15 PM No comments:

You only get out what you put in...sux!

After extensive play testin g I've been making a wee adjustment to the lumbering in Driftwurld, due to go live tomorrow.

The adjustment is that when your playing the mini game to gather lumber supplies, once you get some you have a chance of winning 2 extra lumber on top. You can win this once a day - just keep gathering until you win (secret in the know knowledge - each time you have completed gathering lumber, you have a 33% chance of winning this extra 2 points of hard wood lumber).

I was basically playing and I realised how horribly linear the aquisition of this important resource is. You want more lumber? You just keep playing it over and over and over until you've gotten the amount you needed. There would be no surprise twist - it was as predictable as just grinding away at it.

The whole essence of gameplay is uncertainty. Sure, in the mini game you might choose the wrong answer, but in the larger 'game', there was no uncertainty. Just a predictable increment, as bad as the Flanders version of snakes and ladders where everyone moves one square at a time (because dice are the work of the devil!)

It's nice to have the idea the player has put in, in order to get something. But not at the expense of gameplay/uncertainty.
Posted by Callan S. at 10:53 PM No comments:

Edit: Just a second, working on this post...
I ran into this error when I went to continue patching LOTRO, saying it was unable to decrypt some of the files it downloaded.

After googling about a bit one solution one I found was where the guy went into the program files, into turbine, into the lord of the rings file then used the search function (ctrl-f) and searched for files that had been changed in the last few days where it happened.


After some experimentation (and game crashes! Yikes!) I think this is the one that was the problem. Once deleted the client downloads it again.

Use at thine own risk, if that didn't already occur to ye! Just putting out a possible solution because I had real trouble hunting down this answer, so just repeating it to make it easier for latter folks to find.
Posted by Callan S. at 10:12 PM 19 comments:

Just a cool shot from another developer who also posts at the indie resource forums!

Interesting post over at Tippa's blog - kind of two topics blurred into one, but the second topic is interesting - a quest where you bring an enemy NPC in for...torturing. And the NPC kills himself rather than divulge the information.

The problem I'd see is that this is presented in the gamist format which doesn't give a crud about your morality, it instead demands the most efficient choice from you. In a narrativist format...we'll, I'll quote what I wrote in the comments...

I think the only bad thing about the torture quest is that if you bail on it, you get no XP. I think a game that actually grasps problematic issues in a narrativist vein will give you an equal reward for either torturing him, or bailing on the whole thing. Because for narrativism, it’s about what your character would do and not about choosing an optimal path.

Frankly it sounds like you could do with more quests like that – albiet in a narrativist framework, instead of the psuedo gamist one where you did it because that was the shortest path to advancement.

WIP image - walk through the forest 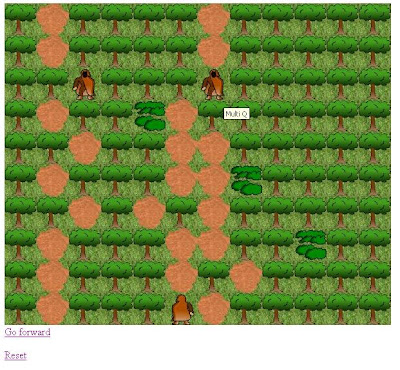 Little image from a WIP I'm considering for drift world. It does give a sense of dimension that text doesn't, and it sort of has other players showing up (though they are automated). Your the little guy at the bottom with your back to the camera (jeez, how many hours have we spent in a mmorpg with a digital characters back to us?). You wander up the little paths of the forest. 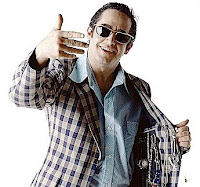 So the jobs market is like a big game and so a subject for this blog, right? Well, not really - in most games you rarely, upon losing, end up living in a cardboard box (nod to the casinos, though...)

But anyway, I was thinking how people want to be paid the amount they are worth. Or atleast I think I've heard people say that? Have you ever said that.

But the thing is, if you've ever trained for that job, shouldn't you need to be paid more than your worth?

Assuming unpaid training. Let's say you do 1000 hours of training, unpaid. And the job that training gets you to is paid at a 'worth' of $20 an hour.

Doesn't it actually need to pay more than $20 an hour, until it's paid off those training hours you did for no pay at the time? I mean, what, were your hours worth nothing at all during training? Not even a dollar an hour?

"But I do the training to get the job!"

Well yes, but your essentially getting it by giving away thousands of hours of your finite lifespan to a business which will then just pay you 'what the jobs worth' and in these days of few permanent positions, might dump you at any given time. As an act of desperate effort to get a job, yes, that makes sense. But then why turn around latter an act as if your actually living in an equitable society who pays you what your worth? If did whatever it takes to get that job, your not in an equitable society. Not to mention my old post stating that you can't get a job, unless you have mind control powers. In the current system, you only ever beg.

I'll finish up paraphrasing an author I like, "If anyone says your lucky to have a job, they literally mean you are lucky to have absolutely no leverage at getting a job".
Posted by Callan S. at 3:02 PM No comments:

Tippa over at West Karana said something I've tried to articulate for awhile. And she said it much better!

Inertia is the inclination of moving objects to keep moving, and for stationary objects to stay put. Once you get going in EVE, it’s easy to keep going. The skill queue charts your course, you have your market ops and your research and the ongoing political situation with your allies and enemies, and it’s just easy to keep moving in that space.

But should you stop — your skill queue empties out and you forget what you were training to do, nobody in game remembers you anymore, your research seems pointless and you are no longer connected to the game. News of a griefer olympics makes space seem even colder.

It’s inertia, and it would take a powerful shove to keep things moving again.

I think you can see the start of that documented in this penny arcade comic.

It ceases to be playing so much as a habit, much like maybe you use the same supermarket all the time to buy your groceries - it becomes a repeating habit. And as much as Tippa points out, when you pluck the inertia out of it - there turned out to be no desire to do the activity, barring the habit of doing so. Like if that supermarket closes for renovations and you go to some other place, maybe you just keep going to that other place even when it opens again.
Posted by Callan S. at 1:48 PM No comments:

Lord of the rings online - skirmishes


I recently finished patching up lord of the rings online and tried out some of the skirmishes - they are good fun! A little bit headed toward doing quake live against bots (I said a little bit, not alot!), but with the grander accumulation model of a mmorpg.

I also notice you can exchange the tokens you get for doing batch jobs on resources, which is nifty.

Sadly they don't seem to have any turbine points trade on the auction house - I was hoping to earn gold/trade gold for turbine points/buy quest packs/additional character slots.
Posted by Callan S. at 4:15 PM No comments: