Yus! I've got a little work in progress browser game going now! It has a short story and a combat system where you have to watch out for the monster special attack! Also a timed weapon system - maybe you'll get lucky and get quad damage!

Here's the link! (recently edited due to migration)
http://www.driftwurld.herobo.com/login.php

I've been quiet because I've been busily coding a browser game! I've just uploaded it to a free host and by and large, it worked! Just need to hammer out a few more parts then I'll give a link!
Posted by Callan S. at 7:19 PM No comments:

Yet another idea for perma death

Basically you have characters who never die, as per usual. But you can make one which you can toggle to perma death.

A blizzard presentation to shareholders somewhere in a secret location...

Blizz dev: "Things have been going great and weve got this great new idea for an expansion! We just need three or four million for development, and it'll make us even more money - and given how we make millions each month, we were thinking..."

Shareholder, in a faintly german nazi voice: "...you vew thinkink..."

Blizz dev: "Could we have a few million to make this amazing new game world area...it's bound to be a profitable as every subscriber will buy one for around one hundred dollars a unit and..."

Shareholder: "...we have heard of somethink else you haft made..."

Shareholder: "Something called a....sparkle pony?" *the shareholder withdraws thier long filter cigarette, acrid smoke spewing from their lips, and slowly taps the burning ember into a rotten ashtray*

Shareholder: "Be tellink me...how much did this sparkle pony be costink to develop?"

Shareholder: "So you are tellink me you want four million dollars to make around a hundred per subscriber?"

Blizz dev: "Yes, it's a great opportunity and.."

Shareholder: "When with the mere pittance of five hundred dollars, we could make twenty five dollars from millions of subscribers?"

Shareholder: "I am thinking...I am thinking, yes, you will begin work on a...new sparkle pony. Perhaps a star pony this time, yes? Perhaps one around the theme of...death?"

Blizz dev: "But my lord, I really must protest, we could...gah! gah! *Blizz dev starts clutching at his throat and slowly rises into the air, until his feet leave the ground, he face red as he chokes. Eventually he falls to the ground...dead!*

Shareholder: "You, the other one, your in command now. I want that rebel base found and I want this death star pony deployed now!" 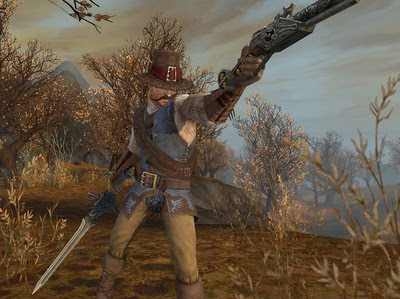 How do you find a picture for cyclic events?
Who knows!? So here's a cool witchhunter from warhammer online!
From an interview on guild wars 2

It’s important to clarify that the event system is cyclical in nature. Events will occur again in the game world; they go in cycles where chains of events cascade out based on decisions and actions taken by the players. These events change the world when they occur, but it isn’t a change that lasts forever in the persistent world, it’s a change that lasts as long as the event chains in the area continue along that path until they cycle around into other events, all driven by player actions.

Now, part of my intellectual mind says to me this is effectively simply another scale of orcs standing around, picking dasies. Something the guild wars guys aren't fond of

You then get a quest which says, "Kill 0/10 ogres" and you proceed to kill a bunch of ogres standing around in a field picking daisies. Since every player in the game needs to be able to do this quest, the ogres will never actually threaten the character's home - they will just eternally pick daisies in the field. The ogres aren't actually doing what the quest says they are - the game is lying to you!

I mean, aren't the orcs dynamic? Can't you interact with them, kill them, and hey they are cyclical dynamic events too - coming back in one minute. Aren't they just as much dynamic events, simply at a smaller scale (side note: Actually reading this again it looks like the GW2 guys primary concern is that the orcs aren't attacking the farm, but nm)

But the funny thing is, real life is a set of cyclic events which are at a larger scale. Go hunt and kill a rabit - another rabit will 'respawn' over time, after the others have had babies. Whether from day to day, or the seasons, are cyclic events. Forests regrowing after being cut down is a cyclic event. All of these happen at a much larger, more complicated scale and longer time span. But they too are cyclic.

So I think that's why GW2's dynamic events have appeal (atleast to me), as opposed to the "over the standing there doing nothing and comes back in a minute orc" from above.

Although perhaps no one else see's the orc and GW2 dynamic events as merely the same thing but at different scales, so I'm arguing about something I just see. Oh well.

I'm thinking of writing up some stuff on more naturalistic cyclic events - where monsters respawn by the old fashioned way - breeding and rearing young, and such (remember how you imagined monsters before they just appeared outta thin air)
Posted by Callan S. at 11:25 PM No comments: