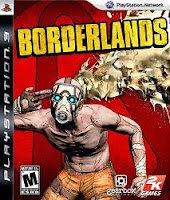 A quick review! Borderlands manages to mix the short term, instant gratification of a first person shooter (ie, the fun of shooting big guns at people alot!) and the long term pursuit of greater power through money and levels/experience.

So your continually playing it at two levels. Sure, you might be side stepping and shooting a skag real good with your gat, but your also thinking about how good it would have been and how good it will be when you auto gun turrent power had killed it. While healing you. And making you fresh ammo.

Essentially they grant you some awesome FPS fun, and have made a leveling system that hands out more awesome FPS fun over time that you actually want. I've played alot of games which give you powers and...while they may be nifty, it doesn't feel like you needed them. It just feels like its for show. While with this game what it hands out, you feel you have a good use in mind for it (and it's cool fireworks to boot!).

And spitscreen on console play is great - was really looking for something else split screen, since weve played time splitters and army of two a million times.

However, on the flip side, you get a thin smear of a game world. Not that I think that's important to develop further, but I think this game was modeled somewhat on fallout. And that sense of a rich world...is kind of muted. It's not absent, it's just doesn't have the centre stage.

And a couple of little things that bug me is that the game insists, when you find a more damaging weapon, to switch your current gun for it. There seems to be no way to turn this off, and it doesn't work out that this is a better gun in terms of the job. And the loading screen shows a cool picture - then snaps it in two and seperates them...then shows it again and repeats, over and over. That's just painful! Clearly not huge issues, but worth noting incase somehow in some magical way that helps it get cleared up next time.

I really recommend buying this game. Like some books are a bit of a classic (not absolute classics, just a bit), this game is a classic. Like a book can capture a certain spirit, this game has captured it's own particular spirit. That and go shoot shoot now now!!!1!!!
Posted by Callan S. at 2:13 AM