Spine of a Dungeon, Part 2 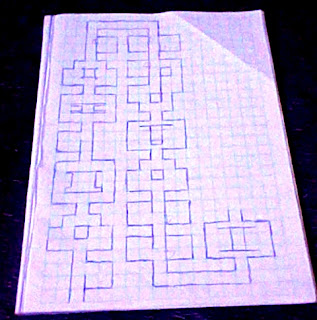 Now in laying out the dungeon, I like my dungeons DENSE! I see no real joy in 60 foot corridors of emptiness over and over - never mind that I'm sure the diggers who made it really wouldn't want to dig a lot for no real reason. But maybe you do and you want to staple graph paper together to accommodate it - fair enough.

Anyway, here we roll on the chart...

Here I'm using 20 foot by 20 foot standard rooms, with a tunnel going right up the graph paper. Perhaps a little regular in structure but A: I don't think the players will notice and B: What does it add to have gone through a wobbly tunnel rather than a straight one?

So, starting the tunnel at the bottom left corner of the page, basically move up enough to accommodate a room and roll. When it come to a split chamber, ie a chamber where the tunnel comes to a T intersection and then each leads into a separate chamber (who's exits then recombine afterward), there are a lot of layouts possible and you can see a few in the picture above. I kept mine to an overall space of 50 feet by 30 feet, fitting both chambers inside that.

Once you are near the top of the grid paper, make a curving tunnel that stretches over far enough to accommodate another tunnel running down the page with possible 20 foot chambers on either side and a 10 foot gap between those and the previous rooms.

Go down the page and near the bottom, make a curving tunnel that takes it back up again.

Of course what you have is one long snaking tube, a linear tunnel with many choices along it. What you can do is simply build horizontal cross tunnels now, to connect it that way. Or if you can't think of any places to put them, hey, just stick with the linear choice tunnel. One idea though is to make the cross tunnels often be secret or concealed. That way it's a sneaky way of getting ahead. If you just have a lot of cross tunnels, then the dungeon doesn't really have an end position, just a lot of places. Which works in some ways, but can also mean a lot of dungeon gets ignored.

In the image above I have no completed the map as yet.

The next part of the series is using a chart to populate the rooms. Oh don't fret, vermisitud-iasts, if some dread and seemingly impossible combination of monstrous neighbours comes into existence, that'll be talked about as well in part 3!
Posted by Callan S. at 4:41 PM