Well, the last step kinda happens during the third step - as your filling rooms with monsters, you might start to see how the monsters live and move around in their environment. Or as you work out a trap, you might see how it creates evidence that gives a clue to look for a trap and why someone set it.

Basically in this step, it's hard to describe because your thinking of how the dungeon lives!


Who walks where - how do they interact with each other. It's also where empty rooms might contain clues or tools to help defeat latter monsters, or even appear to contain a monster when they don't!

The basic rule is not to try and force the ideas to come - if you start seeing something AND if it starts to form into something you can write down, good. If you can't see anything, that's okay - that's what the random generator was for!

It's really hard to describe this in step based form, because its really quite individual from DM to DM. But generally your aiming for two goals - difficulty in play (the statistical/luck kind) AND some way of player skill (in listening to dungeon description and thinking about the dungeon environment) to avoid or mitigate difficulty. Maybe there's some chips out of the stonework of the wall nearby. Player skill comes in in recognising that that's because an arrow trap hits that wall when fired, chipping it. Or atleast the player figures something suspect is up and searches for traps in general, maybe. A game mechanics threat and fiction that gives a clue, over and over.


Leave comments if you have any specific questions - there's alot of room for questions with this!

Side note: I'm kind of keeping the map obscured so as to not give anything away to potential players. Leave a comment if you want a better image. Edit: Though here's a couple of slightly closer versions of the map. 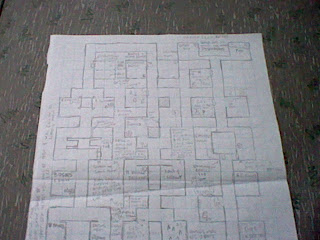 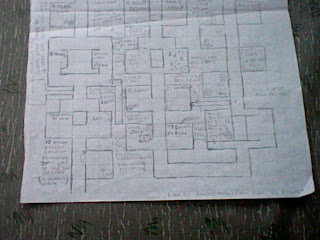