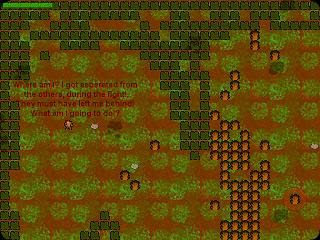 I suppose I was thinking of fallout 3 combat, particularly in the open wasteland, and how there are usually several ways of approaching it (or even several ways of being approached by it!).

I once heard this anecdote of some general from the past that would, as he traveled, ask his fellows what they would do if an attack came from a certain hill or copse of trees. So as to have some sort of plan in mind if it did actually eventuate, rather than waiting for it to crop up and make something up on the spot.

It occurs to me that there are probably two ways to approach a game - just try to beat it, and the other is to use it as a training platform for 'what if' scenarios. In the latter case, just rushing past all the time isn't training yourself for all the possible 'what if's. Yes, it's possible. That doesn't mean the training platform fails - it can't train you into wanting to train for what if scenarios.

On the other hand, most people play in the former case, just trying to beat it. So in the end I put a 70% chance of an invisible wall in front of the boss. So you can decide to risk getting up close to see if you can rush through, or just fight it conventionally. Or even if you can rush through, you might fight conventionally if that's what your training yourself for at the moment.

I should probably make up a name for that training platform idea, since I use it alot and thus really need to refer to it quickly alot.
Posted by Callan S. at 2:15 PM