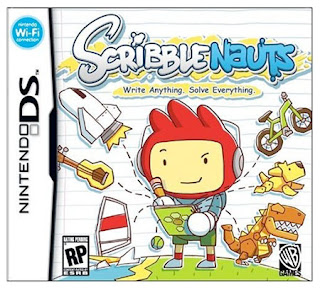 We got scribblenauts for our son, which was much anticipated by him. On the rare occasions I played it myself, it proved a pretty good mix of classic puzzle, plus it's special feature of being able to type words and get the object. As a bonus, I'm sure that helps a childs spelling too!

Since there are so many words you really end up drawing on your imagination to an extent I'm certain no other computer game does at the moment. However, at other times it can just require a combo of a couple of known items to solve something. The good thing in that case is that it often requires a bit of fine tuning of your actions and plan, so it's not a total pushover. Also there's some replayability in trying to figure out a less cheesy way of solving it latter. Sometimes dropping a car on them just isn't enough! ;)

Another good feature, probably a very important feature in a game like this, is that it comes with a level editor. My son made a couple of levels and yes, I failed them a few times before beating them!

It's really engaging and I think would help improve not just childrens imagination and spelling/word range, but adults too. Also it's alot different from most other games out there that copy the old cut and dried formats. It's a bit of gaming history already, that way. I'd really recommend getting it!
Posted by Callan S. at 7:19 PM