Yay, next level is up for my story gauntlet game! 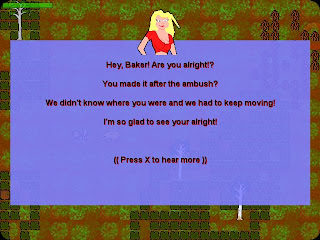 Built up the next level and compiled the exe! Here's it's blog page: http://philosophergamer.blogspot.com/2009/11/gauntlet10.html

I think one of the things that's tripped me up in the past that rather than rearranging content that I've made before, I code up entirely new objects. This is like making up new enemies and platforms in a mario game, every single time AND making a level, instead of taking the platforms and enemies already made and simply arranging the level.

I was headed toward that here, but I think I got out in time, heh! And it's made a few more assets to use in future.
Posted by Callan S. at 9:56 PM